Super City reaches new heights as we install a rigging system, so visitors can view our collaborative installation from all sides.

Super City, a project by artist collective Jim Bond, Helaina Sharpley and Samantha Bryan for our Cultural Residency at the Imagination Lab, has taken to new heights with the installation of a pulley system so that visitors can view this amazing mini-city from all sides – and from below! A view of Super City at ground level

Through a series of workshops, Super City was created by visitors to the Imagination Lab over the summer and comprises buildings populated by people, transport and infrastructure. It’s been a truly collaborative creation, which grew and developed through the ideas and making of many hands, from schools workshops to adult evening sessions.

The core material for the city is wire, which allowed tinkering with design and making skills. These wire buildings were added to with technology to programme the lights, wind turbines, transport, cranes and other moving elements. The people and transport have been created using mesh, clay and craft materials.

Now, Super City will be a permanent fixture in the Imagination Lab and this week we worked with Extreme Rigging to finish off the installation so visitors can view it from all angles! 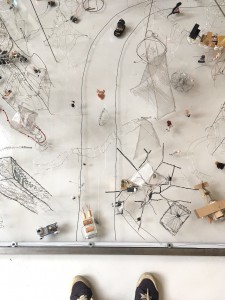 Super City from above 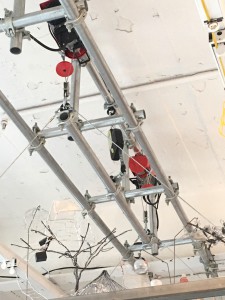 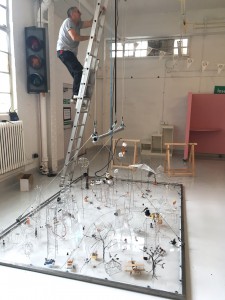 By installing this rigging system, Super City can now be viewed from all angles. This means visitors can see everything from the road networks and infrastructure that the city follows from underneath, to the movement and mechanics of the moving parts from up close. We think it’s amazing to be able to see the base of the city for the first time, providing a different perspective on how this mini-city grew across the workshops with Jim, Helaina and Samantha.

You can see Super City at any of our events in the Imagination Lab – find out what’s coming next on our what’s on pages. Super City elevated above the Imagination Lab – the installation can be lowered to ground level or suspended above the Lab. Super City viewed from below, at maximum height on the new rigging system.

The Cultural Residency is kindly supported by the International Charitable Foundation.