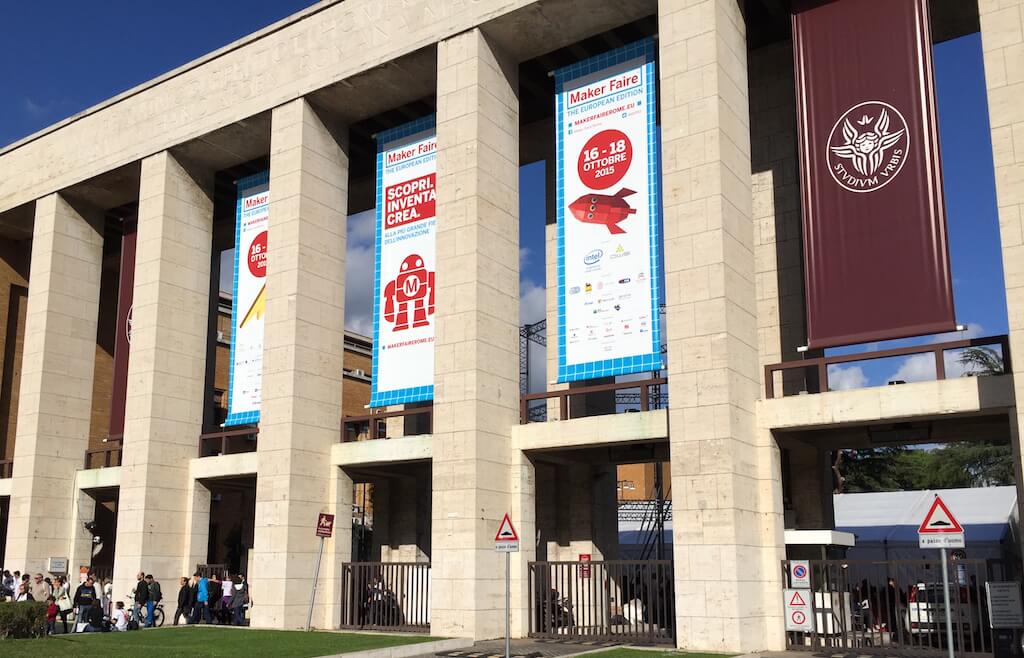 It’s apt that that Europe’s largest Maker Faire is hosted by the city of Rome, birthplace of western civilisation or, as some refer to it, “Caput Mundi” (Capital of the World). From aqueducts, still supplying the city with fresh water today, to Leonardo da Vinci, Italians have not been shy of invention. Da Vinci himself fused his artistic and design talents with sciences and mathematics to great effect, an early pioneer of what today we refer to as STEAM.

Having hosted our inaugural Mini Maker Faire early in the year, iOi were invited to a meeting of European Maker Faire producers against the backdrop of the vast Maker Faire Rome, held this year at University La Sapienza. This three-day celebration of making was a vast ‘show-and-tell’ bringing together technological, computational and engineering development with live music (one of the bands was fully robotic) and inspirational talks.

If you’re not familiar with the Maker movement and Maker Faire, you soon will be. The movement this year has inspired no fewer than 150 global Faires. From Buenos Aires to Lagos, Helsingborg to New York, communities of Makers across the world are coming together to celebrate what can be achieved through the application of human ingenuity and invention. And how quickly it’s grown – this is a movement which only began in earnest in 2006 in the San Francisco Bay Area driven by Dale Dougherty, a father of the modern day Maker Movement. iOi were delighted to meet with Dale and co-creater of Maker Faire, Sherry Huss, in Rome at the meeting of European producers.

Last year, on 18 June, President Obama hosted the first-ever White House Maker Faire and issued a call to action for all Americans to: “lift up makers and builders and doers across the country.” This year the Chinese government is getting behind the movement, keen to explore micro manufacturing and emerging new industries. Next year the founding team is keen to bring a 25,000 plus flagship Maker Faire to London. It is an exciting time to be part of the diffusion.

In Rome the discussion at the producers’ meeting focussed on greater collaboration and communication across Europe between Faires. Every Maker Faire is different but there’s plenty to share and learn from one another, something the central Maker Faire team has begun to develop with the introduction of the Play Book, a ‘how to’ manual. The UK was represented by iOi and colleagues from Derby Mini Maker Faire and Edinburgh Mini Maker Faire where the discussion focussed on an annual UK producers’ meeting; how best to the support the core team on the development of a flagship London Maker Faire and even on holding a Maker Faire on the sleeper train from London to Edinburgh!

The meeting was also a fantastic opportunity to hear from Dale Dougherty whose vision for the future is to see greater growth of the Faires across the world with a stronger focus on schools and education. In the U.S. over 50 schools have already held Maker Faires and Dale is keen to see more learning institutions celebrate and foster invention, creativity and resourcefulness.

Schools, children and families are an important strand of Maker Faire Rome with three designated zones enabling showcasing and workshops. It was good to see the University integration here with students showcasing their projects to children, although it would have been interesting to see greater involvement of the children in the experimental phase of some of the projects which included: hacking their old toys to create smart toys, creating a computer driven air hockey opponent which was impossible to score against and robots controlled through a child’s mind with a special headset. In the main ‘kids’ zone’ a range of workshops was offered over the three days, including tinkering with wearables, stop motion, robotics and learning to code.

Outside the campus the queue for entry stretched around the block, with thousands keen to get inside for a glimpse of what was largely a technology focussed Faire. With many European countries’ economies still looking to rebuild and grow, both the regional government of Rome and the Italian Prime Minister have thrown their weight behind this Maker Faire. Italy is not alone in investing in citizens and their imaginative and inventive skills which one day might spawn new enterprise and radical solutions to global challenges.